Homelessness is likely to persist for the foreseeable future, and people without homes will need health care. The key questions posed to the presenters and participants of the HCH Pioneers Session were: In an era of expanding health insurance coverage and the broader adoption of evidence-based practices such as integrated, trauma-informed care teams, what is the ongoing role for HCH projects? How must the HCH model evolve? How can HCH help prevent and end homelessness? What is the mandate for HCH leaders moving forward? 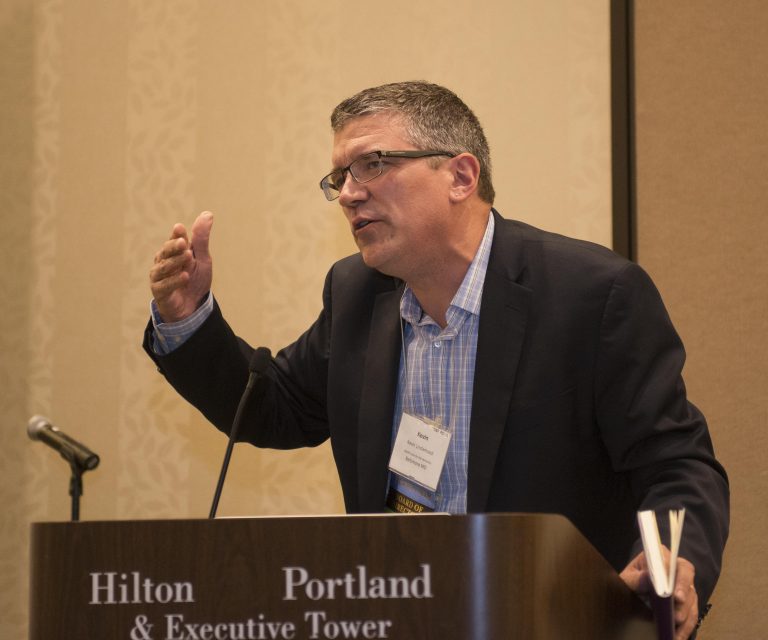 Kevin Lindamood, president and CEO of Baltimore HCH, started off this section of the Pioneers Session by remembering when he started work there as a Jesuit Volunteer in 1993. “I got to work with this rather interesting guy named Jeff Singer. Jeff wrote the HCH Mobilizer, and in the faxed versions he embedded secret messages.” Lindamood left to go to graduate school and work in Detroit, and by the time he came back to Baltimore Jeff Singer had become the CEO, “which meant he could no longer be the Council’s policy person, which is what I think he secretly wanted to still be.” Bernie Sanders was a speaker at the National HCH Conference that year. “We were debating who gets money, who doesn’t get money from Comic Relief. Debating membership. Debating an anti-Iraq War resolution—the link between military spending and homelessness.”

Lindamood went on to say:

You find your next chapter in what you’ve already written. There are seeds in our history for what our future is and needs to be. In terms of the evolution of our systems, our goal was to put ourselves out of business—to train other health care providers to take care of our patients. That hasn’t happened. We’re not really influencing those around us. We’ve developed really good systems to treat people who are currently experiencing homelessness. One of the seeds I’ve seen came from Father Vince Keane—my spiritual advisor—and Dr. Goetchus—who’s at Unity, ahead of many of us in HCH programs who decided to take what was good about that model and incorporate a broader network of CHCs that are serving people who are vulnerable, people who are low income, people on the margins who may experience homelessness. As Bob Taube told me when we were doing our strategic planning back in 2012, we’ve become less concerned about whether or not someone arbitrarily had a place to stay last night—we’re concerned with people on the edge, people on the margins. That becomes controversial because we’re concerned we’re going to lose our focus on the most vulnerable. But I think in our future we need to be wrestling with that: how do we improve systems of care for vulnerable people? And use that to influence broader systems and not maintain this homeless-only focus when we know that homelessness is just a symptom of a far broader problem.

He concluded by stating that there are three questions to ask moving forward:

1) How do we build sustainable organizations? Preparing for evolving payment models? This is a critical phase as our country wrestles with this;

2) How do we build sustainable organizations that can advance deeper justice work and shape the communities around us? The importance of a living wage for our workers. Investing in our people in the long-term, so that they themselves don’t experience homelessness. The importance of consumers in deep and meaningful ways—to benefit from actual lived experiences;

Jenny Metzler, executive director of Albuquerque HCH, spoke of how 1995 was her first HCH conference. “I cut my teeth on your stories, and I offer them up to new people. The big, righteous, smart embrace that is the National HCH Council. There’s a compendium of questions we need to ask. And how do we have these critical conversations?  We need to ask ourselves the hard questions of what we aren’t doing well. Where we need to change. What we’ve done well. The inclusion of consumers, such as through the CAB leadership, but ways to bring us together even better.” Metzler went on to say, “We’re shaped by the health care environment. We can—and have also helped shape the health care environment. We’ve been a resource for the ACA. Do we shape the landscape, do we become the landscape? Did we want to just sit back and wait for them to fail? To say, ‘I told you so’? That’s an indulgent setup to re-traumatize consumers. We’ve invited ourselves to the planning tables. We know we’re a resource. There’s strength in that identity. Pick whatever social justice issue you care about—HCH touches on it.”

Barbara DiPietro, Senior Director of Policy for both the Council and Baltimore HCH, spoke next and pointed out that she has been working with HCH for seven years, but worked 10 years before that on homeless policy. She was “drawn in by the big personalities in the cold State House—people like Kevin Lindamood and Jeff Singer. We’re at the crossroads of so many systems. I’m aware of how many allies we have. All these people we’ve touched by our values and clear dedication to our work.” She spoke of the Medicaid work, of finding new partners through that, through health reform, which is “incremental change and not getting us where we need to go perhaps but people with power, influence, and money—they also get it now—like housing is health care—we’re not the only ones saying that anymore.” She is encouraged by the new partners in the work “who really want to get it. They’re looking for creative ways within a really complicated system, to get there. That’s a leverage point, and I’m excited about these new relationships.”

DiPietro went on to acknowledge that “we’re still working within a toxic policy environment. At the local, state, and federal levels, there’s a disinvestment in housing and social support.” She advocates the use of motivational interviewing in policy work, and for “expanding our allies—bring them in because they may be heard with a different ear. … The 51% solution[1] is a core of who we are.” She also asked, “How do we keep our values within the changing environment?” and addressed how people working within HCH never thought of themselves as mainstream. “We were scrappy, into bending rules and not asking for permission.” She also asked, “What does becoming mainstream mean? We wanted Medicaid expansion—it’s a good thing. We got what we wanted, although not for everyone. We wanted to get our patients off the street and get them in the mainstream. There’s billing and coding—boring stuff—playing by the mainstream rules. And when we’re asked to demonstrate the value of what we do, we’re indignant that we have to do outcomes data and evaluation. … We know what we do works. The challenge is proving it through the data. … We have love and compassion. That’s an envy to a lot of folks. We can leverage that value and respect.”

Gary Cobb, a Community Outreach Coordinator for Central City Concern in Portland, Oregon, was the last panelist to speak. He talked about his work with the “quad morbidity of TBI (traumatic brain injury), addictions, mental illness, and ‘houselessness.’” He spoke of the importance of charting, of documenting TBI. He saw hospital charts of patients with “drug seeker” and “gang banger” written on them, and how stigmatizing these terms are, and that they are labels that follow patients and negatively impact their health care. “We can be instruments in how charting happens in large systems. Teams should have peer providers.” Portland’s teams consist of peer providers, mental health professionals, addiction specialists, nurses, and housing/employment/benefits specialists. “It sounds like a big team, but it’s important to have these wraparound types of support teams.” He concluded by stating that, “Care needs to happen in a very non-judgmental way.” He developed this through motivational interviewing techniques and trauma-informed care training, as well as “reflecting on my own experience. How to provide trauma-informed care and establish boundaries—there’s a fine line there, but it can be done.”

[1] The 51% solution is a stated intention of the NHCHC to devote 51% of its advocacy efforts to addressing systemic causes of homelessness, rather than bolstering services that address the effects of homelessness.