Part Two: Evolution of the Model of Care

HCH was first characterized as outreach-oriented primary care delivered by physician-nurse-social worker teams. The key questions posed to the presenters and participants of the HCH Pioneers Session in this section were: How has the HCH model of care changed in the past 30 years? What factors have contributed to the changes over time (e.g., McKinney Act; Health Center Consolidation Act; Affordable Care Act; managed care; new treatment options)? How does the HCH model fit with the current health care environment? 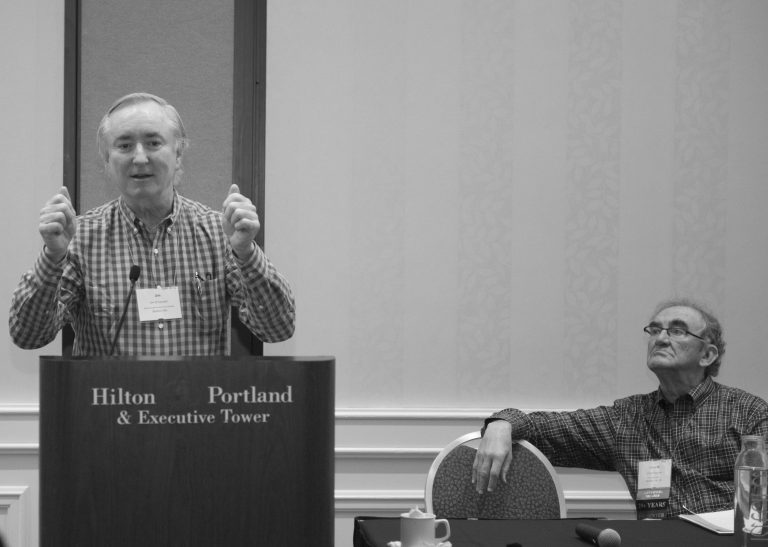 In this section of the HCH Pioneers session, Dr. Jim O’Connell, from the Boston HCH Program, responded to Brammer’s comment about how she is sorry that after 30 years of this work she still has a job. He stated:

We had a different response in Boston which I kind of still hold onto. The Foundation (RWJ-Pew) made it really clear to us that we should be a catalyst within the mainstream and that we should be out of a job within four years. But not because homelessness would go away, but because the world would respond appropriately.  So I want to keep thinking—we do have jobs, but our job is still to change that damn system so that homeless people get taken care of. We’re always going to have the need to take care of people who are in really vulnerable spots.

O’Connell described the fall of 1984 in Boston, when,

88 people formed a coalition—a fierce homeless coalition—and they confronted the mayor. It was an issue of social justice and not charity. They were sick of charity. Advocates said: 1) we couldn’t use volunteers because it smacked of charity, 2) we couldn’t use students because they said students are coming out and practicing on them and then going on with their careers, 3) we couldn’t do research because at the time it looked like “blame the victim” type of research, and 4) we couldn’t do mental health services.

He added that this was after deinstitutionalization, which his colleague Bob Taube always reminds us was a good idea, but the necessary community-based services weren’t provided. O’Connell added that at the time in Boston the shelters were amassing a legal suit against the Department of Mental Health because of their lack of adequate community-based mental health services.

In Boston, they looked at St Vincent’s Hospital as a model program. O’Connell states, “It was the only model at the time. It was a remarkable model of nurses working with doctors. By the way, it was appropriate that the first panel (for the Pioneers session) was all nurses. It was very much based in the hospital but going out and doing services in the community. Homeless folk told us they wanted it to be hospital-based so if they got sick, we’d take care of them.” Their model evolved, providing services in soup kitchens, in detox units, and out on the street. “Then the challenge was how to provide continuity of care.”

It is interesting to note that the only numerical goal that the HCH demonstration projects were asked to meet was to provide services to at least 1,500 people without homes each year. The funders did not stipulate whether or not this was to be an unduplicated count. The original HCH program goals have been characterized as vague, and included continuity of care, coordination of services, and effective case management, without specific operationalized definitions of what these were or of how to measure progress towards these goals.[1] However, early in the administration of the federal HCH program by the Health Resources and Services Administration, HCH-funded programs were required to delineate and document specific primary care problems to address, along with goals, measurable objectives, and method/action steps.[2] 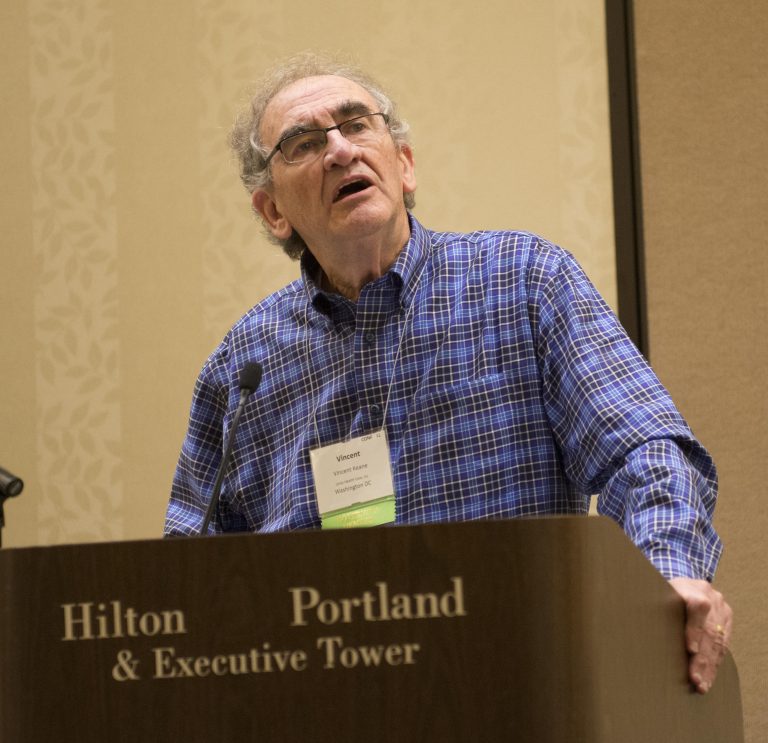 Vince Keane spoke next in this section of the Pioneers session. He said the real pioneer from Washington, D.C., who was in the room was Dr. Janelle Goetcheus. He pointed out that he came into work with HCH when it was already established, in 1990 in Washington, D.C. Dr. Goetcheus and her team believed that “you go where the people were.” He spoke of CCNV (Community for Creative Nonviolence), which was and still is one of the largest shelters in the country. Mitch Snyder ran it “to the extent that anyone ran it. Mitch was the biggest opponent of us coming to the shelter. He believed it was institutionalization of health care delivery. He thought anyone who made money from health care was impure—he saw it as exploitation.” Snyder also insisted that volunteer doctors and universities “love to work with homeless people because they could experiment on them. It took time to earn their [CCNV’s] trust and approval. 30 years later the shelter [with an HCH clinic] is still there. There are 1,000 people currently living in the shelter. Success was developing that collaboration.”

Before Keane worked at HCH he worked at the NACHC (National Association of Community Health Centers) with Freda Mitchem who ran the homeless portfolio before the Council took it over.[3] “She believed in the concept, but it didn’t quite fit at that time under the NACHC umbrella. It wasn’t a right fit at that time with FQHCs.” Keane states that the technical assistance grant went to the National HCH Council instead. He was asked to be the CEO of HCH and “then John took over the contract.”

The Washington, D.C., HCH Project eventually took over for a faltering Community Health Center and became a CHC, Unity Health Care. Keane reports that the agency encountered challenges in “assuring our existing homeless staff we hadn’t lost our mission. We expanded over the years and became a full-fledged CHC.” Keane sees advantages to being a FQHC, especially in terms of being able to provide dental and mental health services. They’ve also expanded their services into the prison system. He spoke of the importance of a team-based approach and creativity within the 19 (original HCH) sites, which were based on the same principles, but were operationally different. The main guiding principles were “1) commitment, and 2) continuity of care. Plus, an integration of mental health/substance abuse/oral health.”

In conclusion he had this to say:

I think it’s ironic that 25-30 years later, that massive movement towards team-based health care delivery. That massive movement towards patient-centered medical homes. Where did this start? I think the health care system can learn from this. … Homeless health care programs were the ones that set the roots in which that was established. I’m excited that it’s happening now and I think we in HCH should be talking to people in the health care delivery system because I think they have much to learn about this model of 30 years ago. 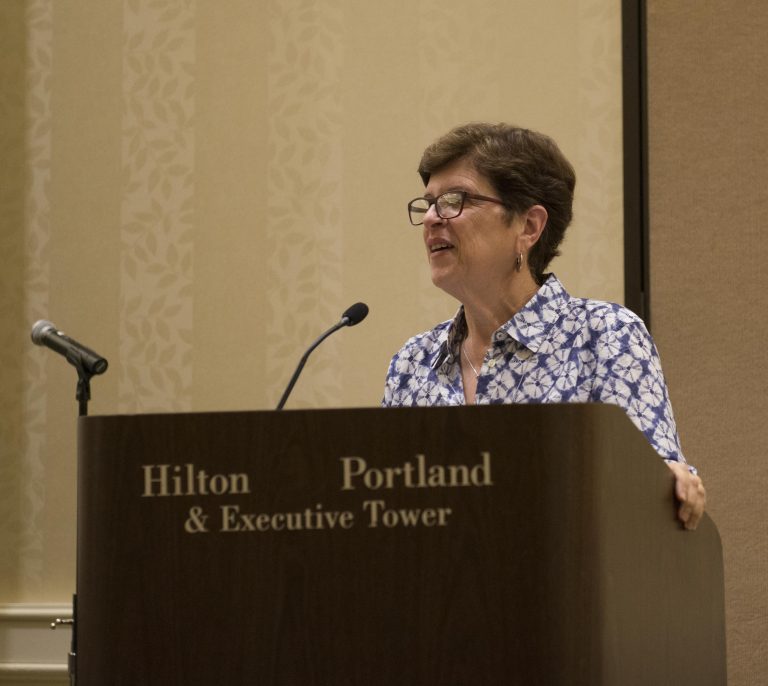 Jean Hochron served as the HRSA point person for the HCH program in its formative years and beyond. She spoke of three phases of the HCH lifecycle from the federal perspective:

There’s little recognition of HCH within community health. We don’t always look like our brothers and sisters in the community health world. But let’s not forget a few other things that have not changed and that are quite remarkable:

In a recent American Journal of Public Health review article, the authors summarize the development of the HCH model of care and emphasize key elements of the HCH model: 1) outreach and engagement, including the development of patient tracking methods[6]; 2) community collaborations to provide HCH patients with a variety of social and health benefits and services; 3) case-management; 4) medical respite care; and 5) consumer involvement and patient-driven care.[7]

[3] HRSA has contracted with a succession of nongovernmental organizations to provide technical assistance, conferences, education, training and resources for its HCH grantees, including NACHC, John Snow, Inc., Policy Research Associates (PRA), and, for the last two decades, the National Health Care for the Homeless Council.

[4] Community Health Centers are required to have Boards of Directors comprised of 51% consumers of the health centers’ services. The legislation allows stand-alone HCH grantees to use alternate mechanisms for consumer input into agency governance.

[5] National Cooperative Agreements are the funding mechanism HRSA uses to contract with providers of training and technical assistance for health centers.

[6] The Boston HCH Program was an early innovator of electronic medical records, used to maintain continuity in caring for a highly mobile population.